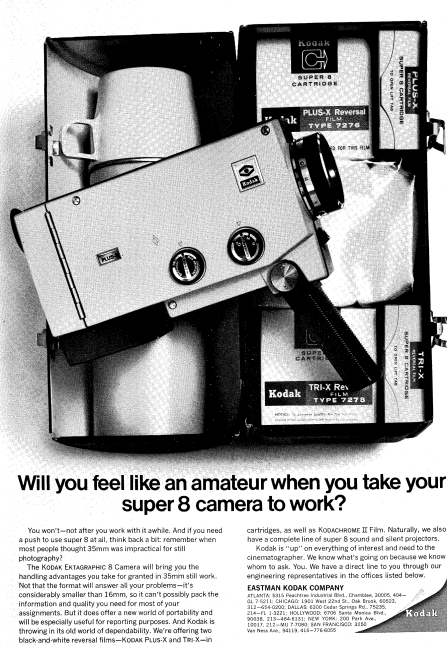 At the Second International Colour in Film Conference last month (27-29 March 2017) I introduced seven short extracts of newly digitised films taken from the Institute of Amateur Cinematographers (IAC) collection held at the East Anglian Film Archive (EAFA) which will soon be made available to view in full on this website. As part of the Eastmancolor Revolution project, one of our key aims is to assess the aesthetical impact of Eastmancolor upon non-theatrical productions including those made by amateur filmmakers. As a professional film stock, the Eastmancolor process was not made readily available to the 16mm amateur market although, for the average amateur photographer, satisfactory colour images had already been achieved with the introduction of Kodachrome in 1935, first for 16mm users and soon after for 8mm, producing high quality images uncommon at the time even for professional production.

For the typical point and shoot home-movie enthusiast content with photographing family portraits and holiday films, colour quickly became preferable over black and white, providing excellent results for the amateur who had, at least, made some effort to engage with the exposure guide found in every new pack of film. The appeal of colour for the amateur was such that during the Second World War, and for some years after, demand far outweighed supply, with enthusiasts finding themselves having to wait for new shipments to arrive at their local stockist. Following the first three-strip Technicolor feature film in 1935, and the later introduction of the Eastmancolor process in its various guises, the feature film industry took much longer to accept colour photography as the standard for theatrical exhibition, with black and white being the preferred choice well into the 1960s (however, this decision would be influenced by a variety of factors including the introduction of colour television).

By the mid-1950s, when 90% of amateur films shot in the US and the UK were in colour, Kodak made the decision to halt production on black and white stock for 8mm in the US followed by a price increase for the same stock being made in the UK, leaving the remaining 8mm users who hadn’t already made the switch little alternative. Furthermore, cheaper colour processing offered for 8mm meant that most now favoured the format over Pathe’s 9.5mm, at a time when Pathe were still recommending that 9.5mm users should concentrate on perfecting their use of black and white rather than worrying about switching to colour. This short-sightedness signalled the end for gauge, which ceased to be a popular format buy the end of the 1950s, leaving Kodak and colour reversal as the outright winners of the battle for dominance of the amateur market.

Aside from the early adoption of colour photography, what also becomes apparent from looking through such publications as Amateur Cine World (ACW) is the sheer determination of the amateur in the pursuit of technical perfection; never wanting to be out-done by the studios of Hollywood, the amateur took the Do-It-Yourself ethos to heart. Following the introduction of widescreen in the 1950s a number of the more technical-minded amateurs became dedicated to reproducing similar images using the small gauges, including methods of how to recreate the VistaVision process on 8mm following a number of modifications made to the camera and projector. The amateur journals also featured a number of DIY guides, often written by readers themselves, instructing other keen enthusiasts on how to produce similar techniques to those seen on the big screen; including methods of creating 3-dimensional effects and even an 8mm version of the Cinerama process. While journals such as ACW provide an insight into the technical ingenuity and creativity of the amateur filmmaker, they also demonstrate an awareness of the shortcomings of monopack colour film stock and the methods which may be employed in order to alleviate long-term storage problems; an issue which only came to the attention of the feature film industry many years later.  As early as the mid-1950s, a series of debates between the writing team at ACW and their readers addressed the issue of fading amateur film stock, providing recommendations for storage and techniques for restoring the original image through a variety of experimental techniques (including the use of Cinetint dye to restore the colour). 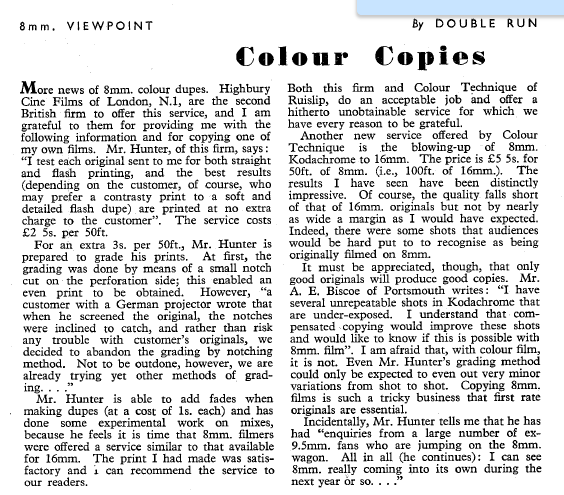 However, something which was often deemed to be of little concern from the amateur perspective was the ability to produce more than just a small number of prints from their camera originals, if any at all. For those who wanted to avoid the risk of using their precious original for use in the projectors, prints could be made from Kodachrome for both 8mm and 16mm users, but would often yield unsatisfactory results, typically giving a high contrast version of the original. Before the introduction of a Kodachrome duplicating stock in 1965, a masking process was employed in order to provide an image quality closer to what had been shot in the camera, although this was an expensive procedure and would often still be somewhat short of the original. Nevertheless, the dedicated amateur, always keen to work with the tools they had, remained steadfast in their support of the non-professional films stocks, offering readers of publications such as ACW alternative methods in the pursuit of high-quality images and prints of their valuable camera originals; even though some still questioned as to why Eastmancolor process could not be made readily available to the amateur filmmaker. With the introduction of Ektachrome Commercial 7255 in 1959, a fine-grain low-contrast reversal stock used for subsequent duplication rather than projection, the 16mm ‘professional amateur’ looking for a small number of prints was now able to easily replicate images of a quality matching Kodachrome originals without the expense of the neg-pos process. Technicians writing for amateur journals in fact suggested that despite some of the obvious advantages of working with Eastmancolor, for the 16mm user, the results when seen on the big screen were inferior when compared to those achieved using Ektachrome. 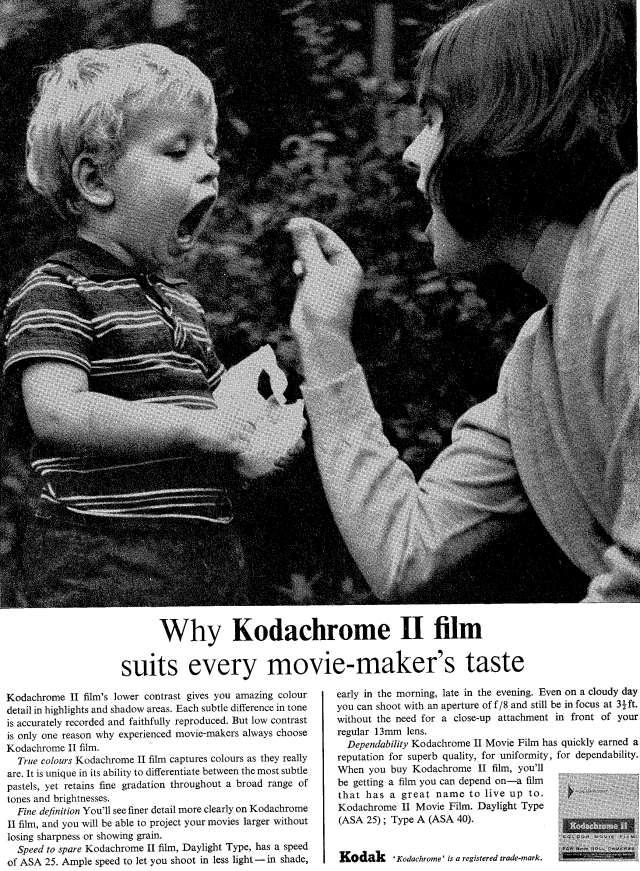 In light of this, Eastmancolor is represented by a small number of the eleven hundred titles within the IAC collection held at EAFA, with only a select number of lone-workers (often using the process for well-planned animations which were less likely to succumb to damage whilst editing the negative) or the larger cine societies (with more resources at their disposal) who were willing to incur the extra cost. For these more ambitious amateurs, who wanted colour but also required more control over their films, Eastmancolor negative benefited from being able to shoot under difficult lighting conditions and also generate good quality prints taken from either the negative or inter-negative. However, both cost and the practicalities of using the neg-pos process played a big part in this decision. As a professional stock limited supplies were made available through such avenues as The Film Stock Centre, London, who re-sold unused undeveloped stock left-over from professional productions. Considering the high quality images the more ambitious amateur filmmakers were able to achieve, through a creative use of lighting, film stock, and experimentation during the printing process, it is hardly surprising that the Eastmancolor was largely ignored by the amateur and regarded as both unnecessary and frivolous.