Sometimes a film perfectly articulates the aims and objectives of a research project. With our timescale of 1955-85 our database is growing – to date we have logged over 2,000 titles. We had many possible candidates for a special screening and event to be organized in partnership with the Watershed Media Centre, Bristol, but the choice was easy. Some People (1962) was filmed entirely in Bristol and featured a local band called The Eagles. It’s a little-known case of how the ‘New Wave’ of British cinema, normally associated with black-and-white, gritty social realist films in northern settings, came westwards, and was defiantly filmed in Eastmancolor. Some People was ostensibly about the work of the then new Duke of Edinburgh’s Award Scheme in giving bored, restless teenagers constructive activities. But it defied expectations of this didactic function by being full of energy, with great music, fast action, and effortlessly good playing. The film’s director, Clive Donner, came from a background in film editing and in the early 1960s he worked for the J. Walter Thompson advertising agency and made commercials for television. This influence shows in Some People, particularly its punchy opening montage accompanied by a blousy, jazz theme. As well as the fresh outlook of the director, the film’s qualities can be attributed to the excellent performances of its young actors, particularly early roles for Ray Brooks (Johnnie), David Hemmings (Bert), David Andrews (Bill), Angela Douglas (Terry) and Anneka Wills (Anne). Kenneth More plays Mr Smith, an enlightened volunteer choirmaster who allows them to practise as a would-be pop group in the church hall after they’ve been banned from riding their motorbikes. As well as documenting Bristol in the early 1960s, featuring advertising signs for new consumer products and hire purchase schemes, the film reflects the young people’s anxieties about their futures, gender and relationships. 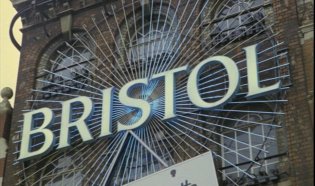 We publicized our event locally in the hope of triggering people’s memories of Some People: ‘Do you remember when you shrank your jeans to fit by sitting in the bath, dreamed of being in a pop group, rode motorbikes, joined a youth club, rode on Bristol’s green buses or danced to The Eagles playing ‘Bristol Express’?’ The film of course shows all these things and more. We screened the film on March 24th 2018 to an audience of 170 people at the Watershed Media Centre. Afterwards we enjoyed tea and cakes followed by a panel discussion featuring those, including our special guest Anneke Wills, who indeed remembered Some People from many different perspectives. The panel, chaired by project PI Sarah Street, began with a Q&A with Anneke recalling filming in Bristol and her memories of working with Clive Donner and the rest of the production team. Donner assembled the actors in Bristol 3-4 weeks ahead of the 6-week shoot so they could bond with each other, the young men could learn the local accent and try out the motorbikes. Anneke remembered a young Nicolas Roeg directing the second unit and how Donner’s flexible approach permitted the actors to improvise which created a great atmosphere on the set. She had a lot of say in the choice of her costumes and revealed that the scene when she appears to be shrinking her jeans to fit in the bath was in fact staged: the jeans were sewn to give them their fashionable leg-hugging appearance. Here we see Anneke by Bristol’s famous Suspension Bridge, and in ‘that scene’ in the bath. The photos of the full panel are – left to right – Sarah Street, John Payne, Anneke Wills, Estella Tincknell, Melanie Williams, Mike Tobin, Sarah Cronin-Stanley, Kieron Webb, Richard Lovejoy and Phil Wilkinson. The closer shot is of Anneke and John. 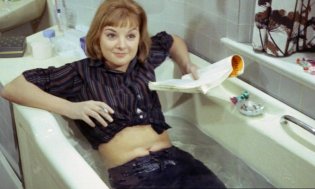 Then the rest of the participants joined the panel. Mike Tobin, expert on Bristol’s local music scene, recalled The Eagles and the many local bands of the early 1960s. There were plenty of opportunities to perform because dance halls had live bands, and youth clubs were also very important venues. We were especially pleased to hear from John Payne who played rhythm guitar in The Eagles. The group was formed in 1958 as an instrumental rhythm quartet (Terry Clarke, Rod Meacham, Michael Brice and John Payne) and they’d won a ‘Best Rhythm Band of Youth Clubs’ prize in 1961, awarded at the Royal Festival Hall and jazz musician John Dankworth was one of the judges. Ron Grainer, best known for his work on the theme music for Dr Who, got The Eagles involved in Some People and he composed the music. Anything seemed possible: ‘Love Me Do’, The Beatles’ first single, reached 17 in the UK pop charts in 1962; it wasn’t until the following year that they experienced major success with the single and LP ‘Please Please Me’. Clive Donner co-managed The Eagles and after recording the music for Some People the group embarked on a world tour and then recorded music for Donner’s film Nothing but the Best (1964). Valerie Mountain did the vocals for the soundtrack’s ‘Some People’, ‘Too Late’ and ‘Yes You Did’ numbers. Here’s a couple of images of The Eagles, including Kenneth More signaling their importance to the film when being interviewed during shooting:

We were also very pleased to have input from Richard Lovejoy and Phil Wilkinson of Reel Streets, the website dedicated to locating film locations and comparing them with photographs of how they look today: http://www.reelstreets.com/

They showed some amazing ‘matching’ shots of Some People’s locations then and now as with this one of Ray Brooks and David Andrews by the harbourside:

Melanie Williams (University of East Anglia) commented on Clive Donner, particularly his exhaustive research process in touring different parts of the UK to find the most appropriate city to build a film around the sponsor’s activities. Bristol was selected because of its youth problems but also because, as Donner told critic Victor Perkins in 1962, the Duke of Edinburgh Award Scheme’s deputy director had contacts there and the city reflected social issues from the perspective of housing estates. Bristol was thought to be a fresher location than the northern settings of so many contemporary British films. Donner also defended the use of colour: ‘It was partly done for the entertainment value, but also because to me the convention that reality is better in black and white is just a convention, and there’s no reason why you shouldn’t adopt another one’. The colour indeed highlights details that are very evocative of the period:

Estella Tincknell (University of the West of England, Labour Councillor, Lockleaze) described the film’s fashions and its many interesting social observations including contrasts between working-class estates and middle-class housing. She observed how class distinctions are evident from the clothes, particularly the young men’s leather jackets, tight jeans and winklepickers that signified a rebellious attitude in comparison with the tweeds and cardigans worn by an avuncular Kenneth More. Changes such as Anne’s decision to go to college are also sartorially marked: her tight jeans worn earlier give way to more ‘feminine’ clothing as she plans her future. The film is indeed a fascinating visual commentary on hairstyles, leather jackets, gender roles, fashions, interior décor and Bristol’s changing social and economic landscape as hire-purchase schemes accelerated consumerism. It features shots of three key industries: Aerospace (the prototype for Concorde); the Wills cigarette factory and the docks, sketching out a really interesting landscape of Bristol in the early 1960s. It was great to hear from Trina Beynon, a hairdresser who worked at the Alan Spiers hair salon, who shared her memories of preparing the actors’ hair for shooting the film. Here are the leather jackets, and Kenneth More in the Aerospace factory, Filton. 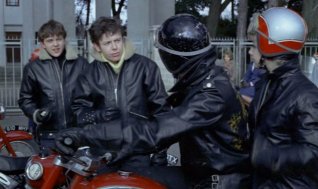 We also heard from Kieron Webb, film conservationist from the British Film Institute, about what’s involved in preserving films like Some People that are in danger of deteriorating. Early Eastmancolor films were prone to ‘pink syndrome’; prints are most often affected but also negatives. The costs of restoration are very high, so not all films can be restored and many remain in danger of being lost forever. Sarah Cronin-Stanley of Talking Pictures TV also spoke about the popularity of older British films on television, and of the importance of them being broadcast today to older and new audiences alike. She commented on similarities between Some People and The Boys (Sidney J. Furie, 1962), a black-and-white film about youth problems that featured music by The Shadows. Talking Pictures will show Some People again and the channel’s focus on British cinema gives viewers fantastic access to many films that would otherwise be forgotten.

We’d like to give thanks to all of our guests, especially to the film’s star Anneke Wills, for their great contributions and also to the local audience’s appreciative recognition and knowledge. Steve Chibnall (De Montfort University) brought a wonderful collection of posters, press books and publicity stills that showed how the film was promoted in the UK and beyond. We also thank the Watershed for their support and enthusiasm, the University of Bristol and the Arts and Humanities Research Council. Carolyn Rickards and Sam Taylor were fantastic co-organisers from the project team. Now there’s no danger of any of us forgetting Some People.