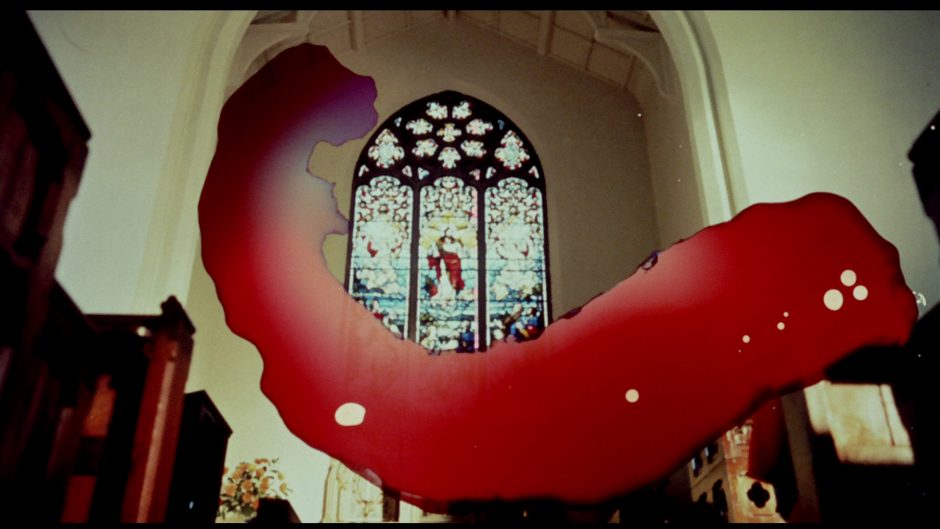 The use of colour in cinematic representations of hypnosis is as old as the medium itself, often employed for the purpose of theatrical spectacle. Possibly the earliest use of hypnosis captured on film is a performance of the ‘serpentine dance’ original created by Loïe Fuller for the play Quack M.D. in 1891. The character Fuller portrayed in the play performed this dance whilst supposedly in a hypnotic trance, wearing a flowing silk costume carefully lit using coloured stage lighting, designed to have an hypnotic effect on the theatre audience themselves.

The use of colour to emphasise the spectacle of hypnosis set the tone for subsequent cinematic representations although, as Deidre Barrett has suggested, this often played upon some of the negative connotations surrounding the practice of hypnosis. The emphasis upon ‘plots of malevolent males using hypnosis to seduce and control hapless heroines’ accompanied by ‘iconography of swinging watches, twirled spiral disks, and the piercing gaze of the cinematic mesmerist’ ensured that hypnosis became firmly linked to the fantasy realms of the horror genre (2006: 15). Kevin Heffernan draws parallels between cinematic representations of hypnosis and the pre-classical period of the ‘cinema of attractions’ when the moving image was ‘capable of eliciting an immediate physiological response from the spectator in the manner of a fairground spectacle’ (2002: 60). These links established between the cinema of attractions and the supernatural realms of the horror genre ensured that hypnosis was most commonly associated with cinematic spectacle and fantasy.

Although these associations were briefly broken in the 1940s, when hypnotherapy was afforded a certain credibility following the rise in popularity of psychoanalysis in Hollywood, depictions of hypnotism as cinematic spectacle returned following the resurgence of the horror genre in the late-1950s. The introduction of colour to the horror genre played a key role in re-establishing this connection, partially as a result of the link between colour and fantasy which prevailed until well into the 1960s.

For the 1959 British horror film Horrors of the Black Museum, the spectacle of colourful hypnotic techniques feature prominently in the film’s promotion of a new theatrical gimmick known as HypnoVista; purportedly allowing audiences to experience the physical effect of the action taking place on the screen. However, HypnoVista was little more than a 13 minute prologue tagged on to the film by American International after its initial UK run – a decision made in the belief that the film needed an additional attraction for American audiences. Taking the form of a lecture or instructional short film in its approach, we are guided through the prologue by Emile Franchel, a psychologist specialising in hypnotism, whose words are accompanied by a series of visuals emphasising the application of colour to the practice and experience of hypnosis. At one point in the prologue, the screen first turns blue, and then red, as Franchel describes the importance of colour in producing specific emotional responses through the power of suggestion. Although Franchel is credited as a registered psychologist within the state of California, the associations between colour, fantasy and the horror genre consequently position him in the role of the ‘carnival barker’, building anticipation for the main attraction.

The appearance of hypnosis in horror cinema of this period, however, is most pronounced in two films of the late-1960s, The Sorcerers and Curse of the Crimson Altar, which like Horrors of the Black Museum, play upon those earlier associations of hypnosis with fantasy and spectacle in order to address contemporary issues relating to the psychedelic experience of 1960s counterculture. 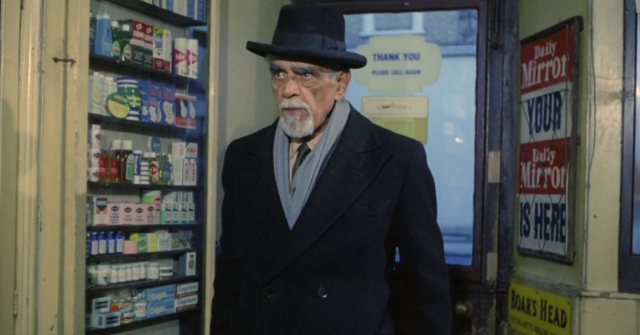 Boris Karloff as Professor Monserrat in The Sorcerers (1967)

In The Sorcerers, Boris Karloff plays Professor Marcus Monserrat, an inventor who takes control of an unsuspecting victim, Mike, through a new hypnotic process which he promises will offer an extraordinary experience; or, to use his words, ‘intoxication with no hangover’ through his ‘multi-coloured miracles’. While the Professor’s words echo the promises made by the carnival ‘barkers’ drawing audiences to their side-show attractions (as depicted in another film dealing with hypnosis, The Cabinet of Dr Caligari, 1920), his description of the process could also be seen as a reference to the psychedelic sensory experience of the 1960s counterculture.

Walking the streets of London during the opening sequence in search of his victim, dressed in his trilby, cane and suitably apt goatee beard, Monserrat becomes the embodiment of the Caligari/Svengali character associated with those earlier depictions of hypnosis. As Monserrat’s process begins, a series of coloured lights are projected upon Mike’s face, accompanied by a soundtrack of electronic noises, designed to induce a trance-like state through which the Professor and his wife are able to take possession of the young man. 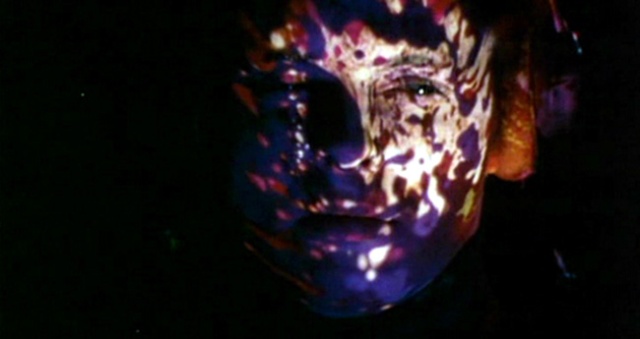 The hypnosis sequence in The Sorcerers

The colour designs employed in this sequence are emblematic of the contemporary swinging scene of the 1960s, baring a similarity to the psychedelic lighting and sounds accompanying the performance space of the counterculture (this is hinted at earlier in the film when we see Mike leaving an underground club in Soho). The connection between the Professor’s experiments and the contemporary counterculture appear to serve as a warning against the possible effects of psychedelia. As with the Op Art movement of the mid-1960s, which sought to alter perception through combinations of colour and lighting, the psychedelic performances of the counterculture adopted similar techniques to offer a sensory experience associated with mind-expanding hallucinogens. The words used by the Professor and his wife to lure Mike echo those proponents of the state of altered consciousness, such as Timothy Leary, with the promise of a hallucinogenic experience without having to suffer any of the potential negative repercussions. 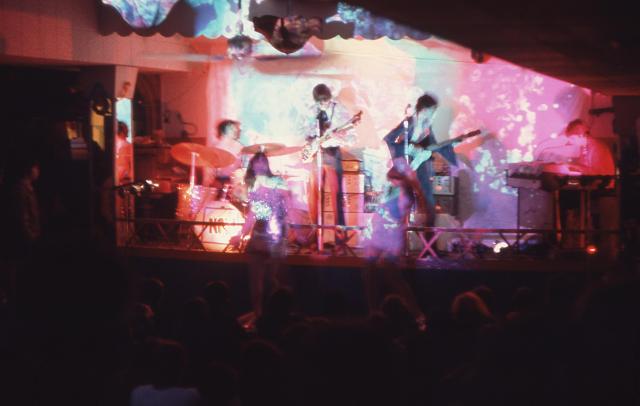 Through these associations the film draws parallels between mind control and altered perception as Mike becomes a puppet for the Professor and his wife, committing murder as a result and leading to the fiery death of all three. Colour is therefore employed in The Sorcerers as a link between hypnosis as horrific fantasy and the imagery associated with the counterculture to offer a more sinister and disturbing idea of the possibilities of the psychedelia trip.

These themes are also apparent in the Curse of the Crimson Altar, warning of the effects of psychedelia from the film’s outset with an opening title which infers the possibility of mind control whilst under the influence. This title card reads ‘…and drugs of this group can produce the most complex hallucinations, and under their influence it is possible by hypnosis to induce the subject to perform actions he would not normally commit (Extracts from Medical Journal)’.

Without explicitly mentioning the drug in question, the warning issued from this anonymous journal is accompanied by an extended sequence early on in the film featuring a hedonistic party at the country house. Although the opening title infers that the use of hallucinogenic drugs are employed to control the mind of the individual, the film takes a similar approach to The Sorcerers in that the altered state is in fact induced through the application of multi-coloured lighting and sound effects. 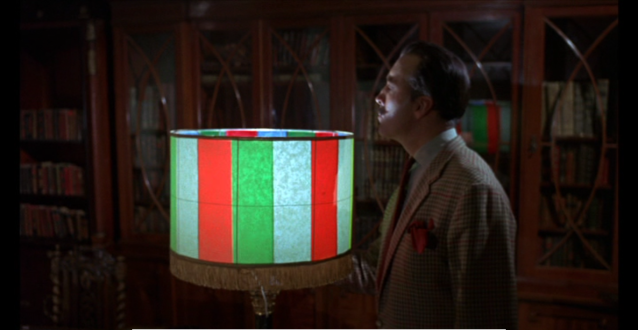 Morley (Christopher Lee) in Curse of the Crimson Altar (1968)

Christopher Lee’s Svengali-like character Morley creates a strobing effect using a device which omits green, blue and red light, in a manner not dissimilar to the techniques associated with the aforementioned psychedelic sensory experience. While it is made clear later in the film that Morley manipulates his victims through hypnosis, the establishing of themes relating to a drug induced altered state from the outset draws parallels with the methods of Professor Monserrat in The Sorcerer’s, linking the psychedelic experience to negative connotations surrounding the cinematic representations of hypnosis. 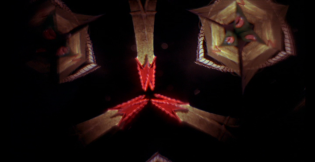 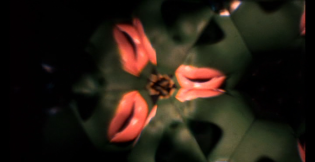 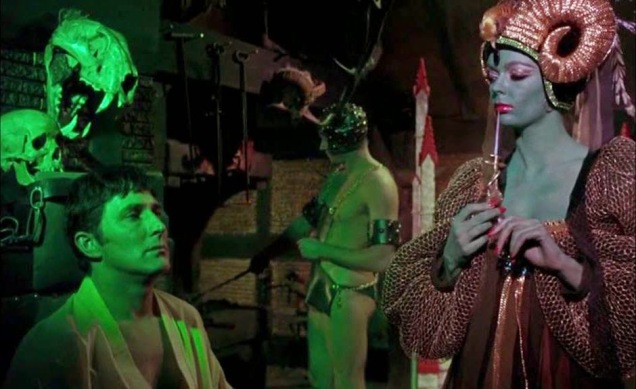 Images from the hypnosis sequence in Curse of the Crimson Altar

During the party sequence at the film’s outset, we are introduced to protagonist Robert who arrives at Morley’s country mansion in search of his missing brother Peter. Whilst under a hypnotic trance, Robert finds himself drawn to a secret attic, where he encounters surreal scenes of devil worship and witchcraft, with colour designs taken from those seen in the device Morley uses to hypnotise his victims. As with The Sorcerers, the importance of colour in representations of the psychedelic experience are paralleled with the increased association with colour as the dominant method employed to demonstrate hypnosis on the screen. This use of colour also emphasises the performative nature of hypnosis, established in those early films of the ‘serpentine dance’, whilst also speaking to the psychedelic experience which had a clear influence on the colour designs employed to demonstrate hypnotic technique.

← The Beauty Jungle: Saturation Without Depth
Global Colour and the Moving Image: Call for Papers →