RESISTING THE LURE OF THE LURID: COLOUR IN THE BLACK TORMENT (1964)

The Gothic shocker The Black Torment (1964) represented a departure for the exploitation producers Michael Klinger and Tony Tenser and their company Compton Films.  They had worked with director Robert Hartford-Davis on his debut feature The Yellow Teddy Bears (1963), a salacious (for the time) film about promiscuity in a girls’ boarding school. For The Black Torment the scriptwriters of The Yellow Teddy Bears, brothers Derek and Donald Ford, created a subject aimed to appeal to the burgeoning horror audience nurtured by the output of Hammer and the newcomer Amicus.  With a much higher budget and a longer shooting schedule than he had been used to, the project also gave Robert Hartford-Davis the opportunity to work for the first time in colour (Spicer & McKenna, 2013: 29).  This was variously billed in its promotional material as simply ‘Color’, ‘Eastmancolor’, ‘Eastman Colour’ or, more prominently featured on the film’s poster and therefore suggesting colour as a selling point, as ‘Diabolicolor’ (Figure 1). While the decision to film in colour aligns The Black Torment with the contemporary Hammer productions, the colour palette it adopts in certain respects sets it apart from these films. 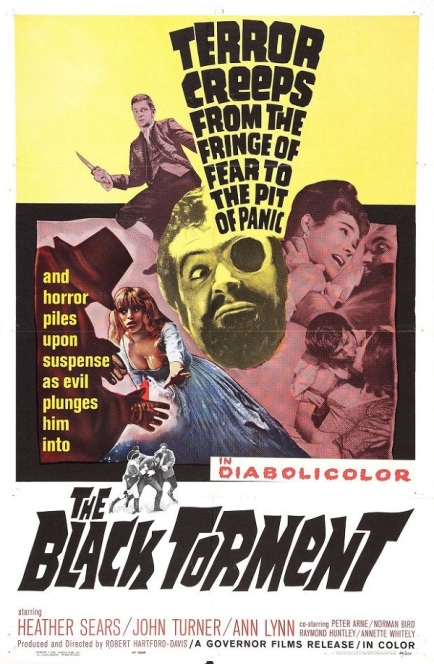 The plot of The Black Torment centres on Sir Richard Fordyke (John Turner), who returns to his estate in 1780 with his new bride Elizabeth (Heather Sears) to find himself accused of the murder of a local girl. Added to this, the ghost of his first wife appears to be haunting the estate. As Richard begins to lose his grip on reality, the sister of his first wife and his steward Seymour (Peter Arne) are revealed to be behind a plot to use his mad twin brother to incriminate him and take over the estate. With echoes of both Patrick Hamilton’s Gas Lightand Daphne Du Maurier’s Rebecca, the film shifts the focus of sympathy from the put-upon female characters of those texts to Richard, whose sanity and marital contentment are restored at the end with the violent deaths of the three conspirators.

In a 1968 interview, director Robert Hartford-Davis spoke of how important it was for every penny of a film’s budget to be visible on screen. This is evident in The Black Torment, for which an elaborate set was constructed at Shepperton Studios and care taken in the colour scheme of its décor and costumes. In its settings and lighting, it employs a predominantly blue colour palette. In his review of the film for Shivers magazine, Jonathan Rigby suggests that it might more appropriately have been titled The Blue Torment, as Director of Photography Peter Newbrook and Art Director Alan Harris ‘smother the whole thing in various shades of blue’ (1997: 6). The house has blue furnishings, wallpaper and carpets, and the colour blue is prominent in the costume designs, while the day-for-night filming bathes the nocturnal scenes in a deep blue (Rigby, 1997: 6). This blue bias has the effect of aestheticising the night sequences, and it is heightened throughout the film by the repeated contrast of the blue with lighting that casts peach and soft orange hues on the paler parts of the décor and with the warm flesh tones of the characters. The use of these opposing tones is evident when the newly married couple arrive at the house to meet the assembled servants.  Richard, in beige and brown clothes, stands between Seymour, who is wearing a blue frock coat and waistcoat, and Elizabeth, who is dressed in fur-trimmed blue with a blue hat and bow.  The wall behind them is decorated with a turquoise blue flock paper whose shade recalls the teal leaning of much recent mainstream filmmaking (Figure 2). Contrasting blue and peach tones are found in the décor of the couple’s bedroom, where blue wallpaper is set off by the pale peach colouring of the door, the panelling below the dado rail and the light dividing curtain. The rug that lies between the door and the bed has a predominantly blue design with a peach border and decorative motifs (Figure 3).

Figure 2. Blue costumes and decor in The Black Torment

The contrast of opposing colour tones is amplified by the lighting in an evening sequence in the bedroom, where it begins to suggest the possibility of a gendered element.  Elizabeth (supine, passive) lies in the foreground in the warm orange glow of the candles, while Richard (upright, active) stands in a darker section of the screen that contains the blue wallpaper, the blue of the night outside the uncovered windows and Richard’s dark blue frock coat trimmed with deep red (Figure 4). These juxtapositions of blue and orange serve to intensify the impact of each colour range. The gendered aspect is not developed as the film progresses, although the contrast of these opposing tones and the visually-pleasing rich Prussian blue of the darker scenes are maintained throughout.

In addition to its use of contrasting blue and pale orange hues, The Black Torment also contains a single expressive use of the colour red in its climactic sequence, which recalls a similar use of the colour in Black Narcissus (Powell & Pressburger, 1947). In the earlier film, Ruth (Kathleen Byron) reveals her love for Mr Dean (David Farrar) and accuses him of loving Sister Clodagh. When he declares angrily that he doesn’t love anyone, the screen fills with red (Figure 5).  The line is delivered as he glares directly into the camera, causing us to read this as a shot from Ruth’s point-of-view.  The camera stays on Dean as Ruth repeats Clodagh’s name before she collapses in a faint, and the subjective camera pulls back to mimic her fall as Dean’s face registers his surprise and the screen fades to black. Sarah Street (2012: 181) notes the ‘extreme effect’ here in the film’s pattern of associations with the colour red. In The Black Torment, rather than being part of a wider strategy, the use of red is an isolated instance. It occurs when Elizabeth, who is armed with a pistol, is attacked on the staircase by Richard’s brother.  She believes him to be her husband and is reluctant to shoot him.  As he approaches menacingly with his hands open as though to strangle her, she backs down the stair begging him not to make her fire. The exchange is filmed in a series of close point-of-view shots until Elizabeth pulls the trigger and her attacker’s face is flooded in red light (Figure 6).  This provides a shock dramatic moment although rather than the subjective position expressed in Black Narcissus, viewed in motion here the red suggests both the explosive pistol fire and, somewhat gruesomely, the spray of blood from the man’s face. Unlike the earlier film, the colour red does not fill the screen.  It only momentarily lights the aggressor’s face, which has been made-up to show the injury caused by the shot, before he raises his hands to his head and collapses over the bannister.  The next shot shows his lifeless body on the floor below.

Figure 6. Red details in The Curse of Frankenstein

This isolated and comparatively restrained use of red distances the colour palette of The Black Torment from that of the Hammer productions it sought to emulate, and specifically from their prominent use of red to signal blood and danger.  In Hammer’s The Curse of Frankenstein (Terence Fisher, 1957), for instance, red liquids in test tubes, red lights in the laboratory, Elizabeth’s red jewellery and red blood on the creature’s face all stand out against a near-monochrome background (Figure 6), with Fisher insisting on ‘blotches of red’ in the woodland scenes (cited in Pirie, 2008: 72-3). Similarly, in The Curse of the Werewolf (Terence Fisher, 1960), red is used against a more neutral scheme to represent blood and to connect it with fear and madness (Harper, 2006: 147), while in The Brides of Dracula (Terence Fisher, 1960) the combination of red and lilac tones creates ‘a seductive dream landscape’ (Rigby, 2004: 99).  In their colour scheme for The Black Torment, the filmmakers resist the pattern established in the Hammer films.  Spicer & McKenna regard the choice as an intentional move on the part of Robert Hartford-Davis to distinguish the film from its Hammer rivals by ‘his use of deep blue-black shadows and a somewhat muted colour register’ (2013: 29).  The film is further distanced from the contemporary Hammer titles by its more ‘opulent look’, while its location filming affords it a comparatively ‘less claustrophobic feel’ (Hanks, 1994: 7).  The Black Torment offers an interesting case of a rival company that sought to appeal to the Gothic horror audience while at the same time differentiating its product from the dominant Hammer films, notably in its visual approach and its use of colour.